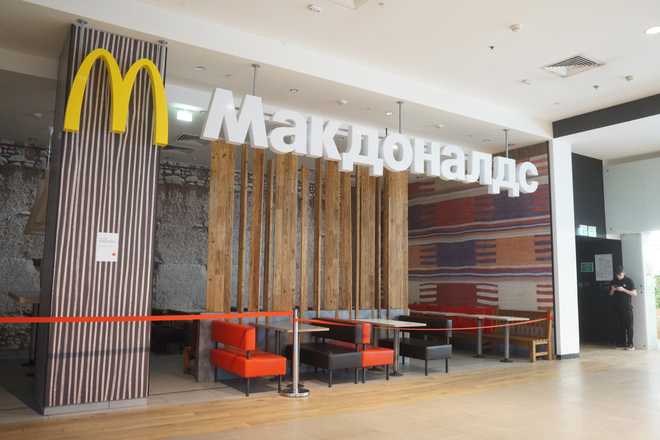 This week’s announcement by McDonald’s that they are selling off their entire business in Russia is the most significant move yet by the corporate world in response to Russia’s war in Ukraine.

McDonald’s says that “the Company expects to record a charge, which is primarily non-cash, of approximately US$1.2-1.4 billion”. Even for a business valued at US$240 billion that is quite a hit.

But McDonald’s exit is significant as much because its opening in Russia 30 years ago was the most potent commercial symbol that, after years of cold war, Russia was joining the rest of the world. We imagined we were at the ‘end of history’,fascism and communism were dead and there ‘should no longer be any serious competition for liberal democracy and the market economy’.

But we figured without dictators, demagogues and oligarchs.  I feel particularly naive because between 2006 and 2011 I spent a lot of time in Moscow when I was with PR firm Edelman. Russia was one of the hardest places to do business and our operation there ended badly.  During that time however, I was impressed with how much people wanted to get on and how much they wanted their country to move on.

Business is very rarely a holy mission, but helping to ‘bring Russia in’ by buying and growing a business and encouraging Russian companies and brands to operate to western rather than kleptocratic ‘norms’ felt a little bit that way.

At my research firm Stickybeak we recently polled young Muscovites on what they thought of the ‘military action’ and at that point they were very much against it.  For many of them, a childhood trip to a shiny new McDonalds was a magical event and the brand is deeply loved because of that. Do not underestimate the symbolic impact of the ‘de-arching’ of Russia on ordinary people.

But on those trips I also met another kind of Russian.  I remember being shouted at by an apoplectic senior official working for the Mayor of Moscow because at Heathrow he had been made to line up with ordinary passengers and show a visa to get into the UK and that visa was not always forthcoming and ‘did the UK not understand that Russia was a superpower and Britain could be snuffed out like that?’. It was like a scene from The Death of Stalin.

Clearly this sort of Russian has had a good run under Putin.

At Stickybeak we have also been polling the issue of Western businesses in Russia for some global clients as they consider what to do.  The shocking brutality of the war and the actions of the Russian army have become very clear, but walking away from a business is not an easy call for companies and their boards, not least because of the very real responsibility many feel towards their Russian employees and partners.

And fiduciary duties and litigious and activist shareholders mean that due consideration and process has to be given by boards and management teams, no matter the horrors we see perpetrated daily by the Russian army.

Yale University tracks the actions of over 1200 companies on the subject of their ‘Russia policies’ and reports that over 1,000 of them publicly announced that they are curtailing their operations beyond the bare minimum required by international sanctions.  Yale has helpfully grouped company responses into five categories; Digging In; Buying Time; Scaling Back; Suspension and Withdrawal which recognises the complexity of the situation businesses face, but also provides activists with a priority target list.

New Zealand’s Fonterra read the room pretty smartly and are firmly in the Withdraw category and have ceased exports and operations.  That said Russia only accounted for 1% of exports and so this was not as tough a call as it is for some European businesses.

Perhaps not surprisingly, many of the Western companies that continue to operate fully or ‘Dig-in’ are business-to-business and so perhaps feel no consumer pressure and tend to be less advanced in governance-by-values.  Perhaps also they hope to continue to fly under the radar.

But some consumer brands appear to be holding out.  Hard Rock Cafe trumpets its values-led approach on its global web site claiming that: “ Social purpose is the life of Hard Rock, a company founded on the mottos – Love All-Serve All, Take Time To Be Kind, Save The Planet, and All Is One. We work to improve lives, help communities and sustain the earth, infusing the power of music into all we do, wherever we are” and yet Hard Rock still operates stores in Moscow and St Petersburg.

In their withdrawal statement McDonalds say that “continued ownership of the business in Russia is no longer tenable, nor is it consistent with McDonald’s values”.  Clearly the same applies to Hard Rock, so why have they made a different choice?

Probably because they operate a franchise model and don’t have full control over the subsidiary.  TGI Fridays, Subway, Beneton, Giorgio Armani and Lacoste are in the same position, which makes the retail franchise model a strength or a weakness in these situations depending on your level of cynicism.

In the Swiss tradition, Nestle attempts neutrality and says that they; “will focus on providing essential food, such as infant food and medical/hospital nutrition — not on making a profit. This approach is in line with our purpose and values. It upholds the principle of ensuring the basic right to food”.  However, they have suspended sales of KitKat meaning Russians will not be able to ‘have a break’, no doubt greatly encouraging the Ukrainians.

A number of firms have pointed out that selling their businesses in Russia would probably benefit some of the very people sanctions are hoping to hurt as Putin’s oligarchs would almost certainly try to pick up a bargain as many did in the firesale of state assets in the 1990s under Boris Yeltsin.  It would be a terrible irony if the sanctions and boycotts of the Ukraine war bred another generation of men gifted private fortunes and able to corrupt Russian commercial and civic life and prop up the next dictator.

Some of the companies not withdrawing also point out that hovering in the wings are global competitors, often based in countries that do not share the West’s view of the war and so have no sanctions to obey or consumer pressure to withstand and are often ‘values light’ businesses.

Nonetheless, the twin pressures of ‘doing the right thing’ and consumer sentiment are incredibly powerful as evidenced by Yale’s assessment that of the 1200 companies they are tracking, only about 200 are operating in Russia undeterred.

And for those businesses and boards in any doubt, the Ukrainians are very clear that they want Western businesses in Russia to cease operations immediately and that they are prepared and organised enough to make their views known to consumers and stakeholders in the West. And as we now know, a determined Ukrainian is not to be underestimated.

As for the level of consumer pressure that can be brought to bear on companies and brands still operating in Russia, there appears to be considerable, though varying scope. Stickybeak recently polled consumers in France, Germany, UK and USA on behalf of a Ukrainian business coalition.

Not surprisingly, in Germany, UK and USA over three quarters of respondents oppose Russia’s actions. In France, an outlier on many responses, only about half oppose.

Awareness that companies are making changes because of the war is universally high.

Less well known in the UK and USA is the link between a company paying taxes in Russia and the war effort.  The Ukranians are very keen that people understand that profits attract taxes and taxes pay for bullets and bombs and this will be a central part of their communications campaign.

Strong support for companies cutting ties with Russia is almost double in the UK and USA compared to France, where only 42% support cutting ties. That said, some of France’s biggest companies like L’Oreal have done just that.

When it comes to personally boycotting companies that continue to do business in Russia, France is again an outlier and UK and US consumers the most bullish.  A possible reason for the French consumer response is the effectiveness of Russia’s propaganda campaign according to an IFOP poll which shows about half believing Kremlin narratives on the war.

On the type of response consumers think companies should adopt: making no change, scaling back or suspending operations entirely, French consumers are most likely to favour no change.

Whilst there is always a gap between what people say and what they do, the response on buying products from companies still operating in Russia compared to those not is unequivocal in the UK and USA, strong in Germany and evenly split in France.

And finally, consumers do seem to welcome being informed and educated on this issue.  Companies pulling out tend to be very public about that, which is not the case for those ‘digging in’.  For the bigger and more consumer-facing of them, life may soon get a little more complicated as the Ukranians plan to shine a light on the biggest that are staying the course.

The sample of 800 was polled at cost by Stickybeak and is smaller than we would like, but as our Ukrainian client pointed out, we have ‘other important uses for the money’.  However, we have conducted much larger polls for other clients on exactly the same topic in these and other markets and the results are very similar.

For all the cynicism about brand purpose and CSR, the Russian invasion of Ukraine has shown that the majority of values-based businesses affected are making the tough calls and once they get used to doing so it is much more likely they will do it again in the future on other issues.

Maybe Putin has breathed new life into brand purpose and CSR as well as NATO?